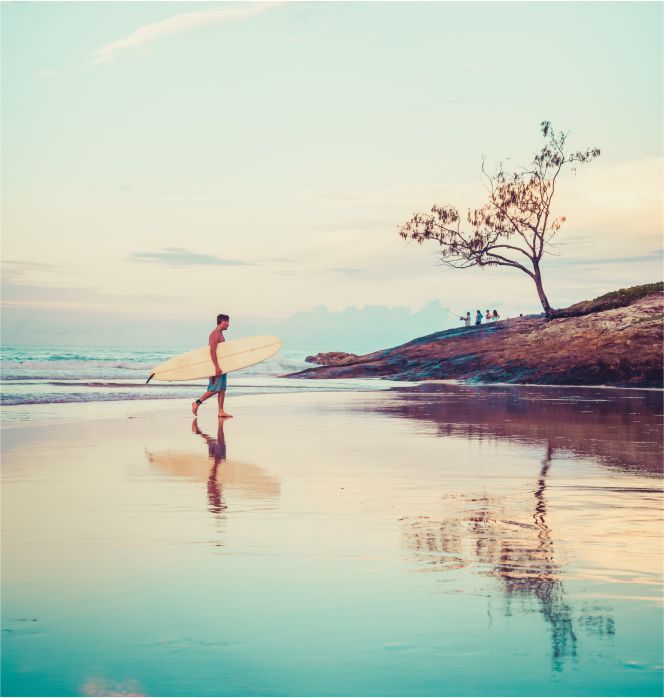 Alan Richards came to the island, in 1970, on a camping trip and fell in love with ‘Straddie’. Alan purchased a fisherman’s shack on the Amity waterfront for the hefty sum of $500. In 1994, he bought the existing business Dolphin Real Estate, and has helped many buyers find their own piece of paradise on Straddie.

When I was 14yo and still in school, Alan gave me one of my first jobs, which was making up the property window cards while my mum worked at Dolphin Real Estate in property sales. I left the island for a number of years to pursue a career in the airline industry and returned to settle back on Straddie, in 2012, to raise my own family.

I am 3rd generation Straddie local. My grandparents met coming to the island many years ago, and raised a large family that has increased to over 40 descendants most of which still call Straddie their home. My family have always been involved in real estate, and I have followed my mother, two uncles and Alan before me into a job that I absolutely love and I am extremely passionate about.

Since 2013, I have been running Dolphin Real Estate in partnership with Alan until his passing in April 2020. Helen Toohey came to join our team in 2017 as our Administration Assistant.

Helen has had an association with Straddie, since 1975, and having relocated permanently back to the island, in 2017, is proud to call herself a Straddie local. Helen loves to share her local knowledge with our buyers and vendors and has now evolved into our Office Administration and Salesperson.

We are now updating our brand and image, Dolphin Property Sales, into something that represents who we are today, and we will  continue to run the business, as Alan has done since 1994, with honesty and integrity and a huge love for the island and its very special community.

Meet the teamContact us
Latest Properties
Under Offer

This Amity Cottage is located within metres to the iconic...

This gorgeous stunning home sits high on the hill above...

This renovated three bedroom one bathroom island home is located...

Views, pool, walking distance to the beach, a self contained...

Use our simple search form to find your dream property! Filter by suburb, category, price, property features and more!

How much is your home worth? Are you looking to sell your property? We can help. Please fill out our appraisal form and we will reply to you shortly!

Are you interested in receiving listing alerts from us? Subscibe now! You can set your own preferences for property alerts.